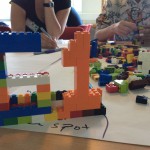 Highlights from a new student (staff) group London Digital Student Meet-up (LDSM) co-organised by LSE and UCL it aimed to provide a platform for student networking. LDSM is open to all students working on digital literacy and student engagement projects in the London area.

‘Student-staff partnerships are honestly less scary than they sound and there are so many benefits to reap from these partnerships’.

The quote above is from a participant of the London Digital Student Meet-up (LDSM) an informal networking event held at the beginning of June. It clearly illustrates how much is to be gained from such partnerships as well as hinting at the complexities around them. Having said that – the excellent examples of projects we heard about prove that however scary this prospect may appear from the outside, the benefits and rewards are certainly proving more than worth it.

Throughout the morning there were many examples of the benefits of student partnership projects and feedback from the projects was overwhelmingly positive. Projects generally bought students into contact with people outside of their course and this had proved fertile ground for innovation and pushed boundaries for those involved.

In planning the morning with Dr Jane Secker, Copyright and Digital Literacy Advisor from London School of Economics we decided that it was important to make sure there was a high ratio of students to staff and to give the event a really informal feel. I was particularly inspired by a presentation I had seen recently which had introduced me to the concept of ‘Serious Lego Play’.  The imaginative models made and conversations around them that took place have convinced me that this is indeed an idea to be taken seriously – and it something I will definitely use again to facilitate conversations in the future.

The morning started with Jane talking about what digital literacy means and referring to the Jisc developed digital capabilities seven elements model .

We also heard about student (staff) collaborations and how technology has a key role to play in many innovative learning experiences and that students are often quicker to identify potential solutions than staff. By seeing students as partners in the delivery of their education, institutions benefit from fresh perspectives while students gain a sense of empowerment and skills valued by employers.

Next up on the agenda was Peter Chatterton for talk and group discussion about the Jisc Change Agent Network .  Updates and information about the pilot for the SEDA Institutional Change Leader award – which is just about to complete its first iteration this summer – plans are to run it again this in the new academic year.

The world cafe topics for discussion provided lively conversations which were limited only by the time available. Participants were encouraged to write on the tables which had been covered in paper so that conversations and ideas could be captured before they moved onto the next topic. The discussions produced copious notes which are being written up and will be shared with participants. The wild card table provided some really interesting ideas – amongst which was the reminder that it is just as important to ‘switch off’ with a request for Wi-Fi free study zones and a suggestion that there should be no written exams for ‘digital subjects’.

Helen Beetham then gave a short introduction to the Jisc Benchmarking the student digital experience tool which was then made available to participants for consultation. The tool has been designed to provide institutions with a benchmarking framework so they can improve the student digital experience – the tool will then be rolled out to universities via the NUS  ‘student voice’  network. The work was part of the Jisc Digital Student  project and the benchmarking tool will really help universities by providing a quick and easy way to assess institution provision against existing evidence and student expectations.

It was really very heartening to hear that not only are there so many projects underway but that they are proving very effective in bringing about such rapid and impactful change. That the morning attracted 50 participants and that we had two offers for future venues before the session was over are surely indications of how informal events like this are needed for those working on similar projects. Looks like it may be time to think about breaking out the Lego again!

We use cookies on our website to give you the most relevant experience by remembering your preferences and repeat visits. By clicking “Accept”, you consent to the use of ALL the cookies.
Cookie settingsACCEPT
Manage consent

This website uses cookies to improve your experience while you navigate through the website. Out of these, the cookies that are categorized as necessary are stored on your browser as they are essential for the working of basic functionalities of the website. We also use third-party cookies that help us analyze and understand how you use this website. These cookies will be stored in your browser only with your consent. You also have the option to opt-out of these cookies. But opting out of some of these cookies may affect your browsing experience.
Necessary Always Enabled

Any cookies that may not be particularly necessary for the website to function and is used specifically to collect user personal data via analytics, ads, other embedded contents are termed as non-necessary cookies. It is mandatory to procure user consent prior to running these cookies on your website.